On India's western coastline, the former Portuguese colony of Goa tells a visibly different story than the rest of India.

Goa is known for beaches, historic sites, and shopping. Your plan includes some of its best attractions: tour the pleasant surroundings at Palolem Beach, identify plant and animal life at Animal Shelter Agonda, relax and rejuvenate at Cyril Yoga Ayurveda Centre, and delve into the distant past at Church and Monastery of St Augustine.

Plan a trip to Goa easily and quickly by telling Inspirock to suggest an itinerary.

Ahmedabad to Goa is an approximately 4.5-hour flight. You can also drive; or do a combination of train and taxi. Traveling from Ahmedabad in November, expect nights in Goa to be a bit warmer, around 29°C, while days are a bit cooler, around 34°C. Wrap up your sightseeing on the 20th (Fri) to allow time to travel to Ahmedabad.
more less

Things to do in Goa 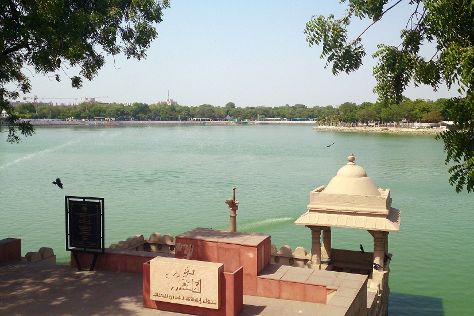 The state's commercial, if not political hub, Ahmedabad stands as a sprawling metropolis with some important historical sites.

Kick off your visit on the 21st (Sat): contemplate the waterfront views at Kankaria Lake, snap pictures at Dandi Bridge, then steep yourself in history at Sabarmati Ashram / Mahatma Gandhi's Home, and finally take in the waterfront at Sabarmati Riverfront.

To see more things to do, traveler tips, photos, and other tourist information, use the Ahmedabad trip itinerary planning tool.

Traveling by flight from Goa to Ahmedabad takes 4.5 hours. Alternatively, you can drive; or do a combination of taxi and train. When traveling from Goa in November, plan for a bit warmer days and a bit cooler nights in Ahmedabad: temperatures range from 38°C by day to 20°C at night. Finish your sightseeing early on the 21st (Sat) to allow enough time to travel back home.
more less

Things to do in Ahmedabad