©
Naples is the capital of the Italian region Campania and the third-largest municipality in Italy after Rome and Milan. On the 27th (Fri), don't miss a visit to Via San Gregorio Armeno and then delve into the distant past at The Neapolis Buried. On your second day here, get impressive views of Vesuvio National Park.

To see maps, photos, other places to visit, and tourist information, go to the Naples trip site.

Perth, Australia to Naples is an approximately 23.5-hour combination of flight and train. You can also fly. You'll gain 7 hours traveling from Perth to Naples due to the time zone difference. When traveling from Perth in April, plan for little chillier days in Naples, with highs around 23°C, while nights are about the same with lows around 13°C. Wrap up your sightseeing on the 29th (Sun) early enough to drive to Positano.
more less 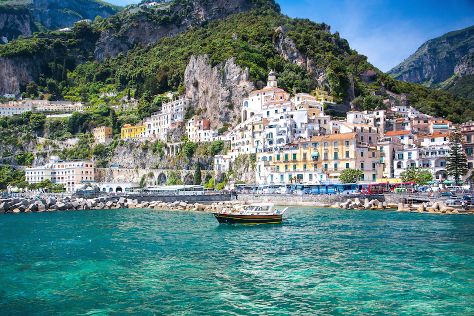 Start off your visit on the 30th (Mon): get some thrills on the water with Exclusive Cruises. On the 1st (Tue), you'll have a packed day of sightseeing: stop by Artigianato Rallo, enjoy the sand and surf at Fornillo, and then get great views at Il Sentiero Degli Dei.

To see reviews, other places to visit, and tourist information, read our Positano trip planner.

You can drive from Naples to Positano in 1.5 hours. Alternatively, you can take a bus. April in Positano sees daily highs of 22°C and lows of 15°C at night. Wrap up your sightseeing on the 2nd (Wed) early enough to drive to Amalfi.
more less

Exclusive Cruises
Highlights from your plan

Known for its impressive hillside cascade of colorful stone buildings down to the Mediterranean shore, Amalfi is the cultural and commercial heart of southern Italy's Amalfi Coast.

Take a break from the city and head to Cascate di San Fele and Oasi Fiume Alento. Discover out-of-the-way places like Duomo di Sant'Andrea and Grotte di Castelcivita. When in Amalfi, make a side trip to see Cantine del Notaio in Rionero in Vulture, approximately Rionero in Vulture away. There's much more to do: take in nature's colorful creations at Villa Cimbrone Gardens, admire the striking features of Villa Rufolo, don't miss a visit to Vicoli, scale e archi, and appreciate the views at Valle dei Mulini.

Traveling by car from Positano to Amalfi takes an hour. Alternatively, you can ride a ferry; or take a bus. Expect a daytime high around 26°C in May, and nighttime lows around 21°C. Finish your sightseeing early on the 7th (Mon) so you can drive to Rome.
more less

Things to do in Amalfi

To see maps, reviews, where to stay, and other tourist information, go to the Rome trip maker.

Getting from Amalfi to Rome by car takes about 3 hours. Other options: do a combination of taxi and train; or take a bus. Plan for slightly colder nights when traveling from Amalfi in May since evenings lows in Rome dip to 17°C. Finish your sightseeing early on the 9th (Wed) to allow enough time to take a train to Modena.
more less

Deemed the Capital of Engines, Modena is the birthplace of Enzo Ferrari and the headquarters of Italian sports cars.

On the 10th (Thu), take in the dramatic scenery at Bucamante Waterfalls, look for all kinds of wild species at Salse di Nirano, and then take a memorable tour with Tours. Keep things going the next day: examine the collection at MEF-Museo Enzo Ferrari, then examine the collection at Museo Ferrari, then contemplate the long history of Palazzo Ducale Piano Primo, and finally contemplate in the serene atmosphere at Duomo di Modena.

To see maps, other places to visit, where to stay, and other tourist information, use the Modena trip planner.

You can take a train from Rome to Modena in 3.5 hours. Alternatively, you can drive; or fly. Expect a daytime high around 27°C in May, and nighttime lows around 14°C. Cap off your sightseeing on the 11th (Fri) early enough to catch the train to Florence.
more less

Things to do in Modena 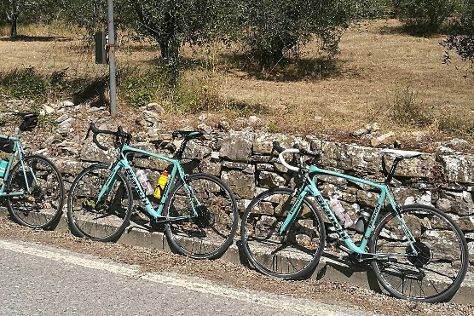 Get outdoors at Tuscany.Bike Rent & Tours and Very Tuscany. Eschew the tourist crowds and head to The Baptistery of St. John and Basilica San Miniato al Monte. Change things up with these side-trips from Florence: Degusta La Cinta Senese (in Bagnaia), La Taverna dei Barbi (in Montalcino) and Castello di Verrazzano (in Greve in Chianti). The adventure continues: take in the spiritual surroundings of Cathedral of Santa Maria del Fiore, take in the views from Ponte Vecchio, explore the world behind art at Florence Academy of Fine Arts, and don't miss a visit to Piazzale Michelangelo.

You can take a train from Modena to Florence in 1.5 hours. Alternatively, you can drive; or take a bus. May in Florence sees daily highs of 25°C and lows of 13°C at night. Wrap up your sightseeing on the 16th (Wed) to allow time to take a train to Milan.
more less

©
The Baptistery of St. John

On the 17th (Thu), take in the architecture and atmosphere at Chiesa di Santa Maria presso San Satiro, then get interesting insight from Puresport, and then see where the action happens at Mediolanum Forum. On the 18th (Fri), you'll have a packed day of sightseeing: head outdoors with Il Bosco dei Cento Passi, contemplate in the serene atmosphere at Certosa di Pavia, and then snap pictures at Ponte Coperto.

Traveling by train from Florence to Milan takes 2.5 hours. Alternatively, you can drive; or fly. May in Milan sees daily highs of 26°C and lows of 15°C at night. Wrap up your sightseeing on the 18th (Fri) to allow time to travel back home.
more less