Sitting astride the Ljubljanica River, Ljubljana is marked with picturesque bridges and a marketplace, designed by the famous architect Jože Plečnik.

On the 8th (Thu), head outdoors with Outdoor Activities, snap pictures at Dragon Bridge, then contemplate the waterfront views at Ljubljanica River, and finally don't miss a visit to Prešeren Square.

To see ratings, more things to do, and other tourist information, read our Ljubljana itinerary maker.

Edinburgh, UK to Ljubljana is an approximately 7.5-hour flight. You can also take a train; or do a combination of car and train. The time zone difference when traveling from Edinburgh to Ljubljana is 1 hour. Traveling from Edinburgh in July, things will get a bit warmer in Ljubljana: highs are around 32°C and lows about 17°C. Cap off your sightseeing on the 8th (Thu) early enough to go by car to Zagreb.
more less

Things to do in Ljubljana

Zagreb boasts a combination of Austro-Hungarian and Socialist architecture, but it is beloved for its outdoor cafe culture.

Kick off your visit on the 9th (Fri): examine the collection at Museum of Broken Relationships, then partake in some friendly competition at Escape Room Enigmarium Zagreb, then contemplate in the serene atmosphere at St. Mark's Church (Crkva sv. Marka), and finally take the plunge with a skydiving experience. On the 10th (Sat), you'll have a packed day of sightseeing: get the lay of the land with Walking tours, then admire the landmark architecture of Cathedral of the Assumption, then tour the pleasant surroundings at Recreational Sports Center Jarun, and finally get your game on at Legame Studio - VR Gaming Studio.

For where to stay, traveler tips, reviews, and tourist information, you can read our Zagreb trip itinerary planner.

You can drive from Ljubljana to Zagreb in 1.5 hours. Alternatively, you can take a shuttle; or take a train. In July, plan for daily highs up to 34°C, and evening lows to 18°C. Finish your sightseeing early on the 10th (Sat) to allow enough time to travel to Sarajevo.
more less

Things to do in Zagreb

On the 11th (Sun), contemplate in the serene atmosphere at Gazi Husrev-beg Mosque, contemplate in the serene atmosphere at Emperor's Mosque, make a trip to Sarajevo War Tunnel, then pause for some serene contemplation at Katedrala Sarajevo, then admire the masterpieces at Galerija 11/07/95, and finally examine the collection at War Childhood Museum. On the 12th (Mon), you'll have a packed day of sightseeing: snap pictures at Latin Bridge, gain interesting insight with a heritage tour, and then steep yourself in history at Bascarsija.

You can fly from Zagreb to Sarajevo in 4 hours. Alternatively, you can drive; or take a bus. In July in Sarajevo, expect temperatures between 32°C during the day and 16°C at night. Finish up your sightseeing early on the 12th (Mon) so you can travel to Belgrade.
more less 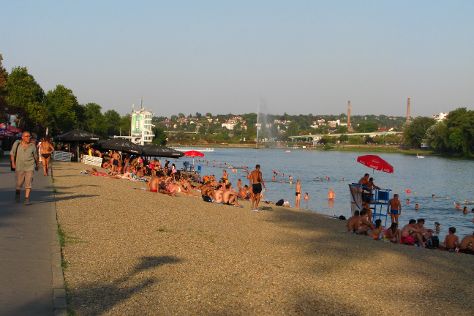 The capital and largest city of Serbia, cosmopolitan Belgrade sits on the confluence of the Sava and the Danube rivers.

Kick off your visit on the 13th (Tue): pause for some serene contemplation at St. Sava Temple, then engage your brain at Nikola Tesla Museum, then steep yourself in history at Kalemegdan, and finally kick back and relax at Ada Ciganlija.

You can fly from Sarajevo to Belgrade in 3 hours. Alternatively, you can drive; or do a combination of car and train. In July, daytime highs in Belgrade are 34°C, while nighttime lows are 19°C. Finish up your sightseeing early on the 13th (Tue) so you can go by car to Skopje.
more less

Things to do in Belgrade

Start off your visit on the 14th (Wed): snap pictures at The Stone Bridge, then browse the exhibits of Memorial House of Mother Teresa, and then explore the activities along Lake Matka.

To see other places to visit, where to stay, photos, and tourist information, read our Skopje trip planner.

You can drive from Belgrade to Skopje in 4.5 hours. Alternatively, you can fly; or take a bus. July in Skopje sees daily highs of 37°C and lows of 19°C at night. Finish up your sightseeing early on the 14th (Wed) so you can travel to Athens.
more less

Kick off your visit on the 15th (Thu): take a stroll through Plaka, explore the world behind art at Benaki Museum, and then admire the masterpieces at National Archaeological Museum. On the 16th (Fri), you'll have a packed day of sightseeing: appreciate the history behind Temple of Olympian Zeus, then get engrossed in the history at Acropolis Museum, then explore the ancient world of Acropolis of Athens, and finally appreciate the history behind Erechtheion. 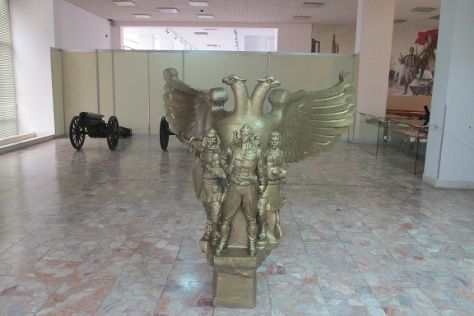 Kick off your visit on the 17th (Sat): stroll around Grand Park (Parku i Madh), explore the world behind art at National Gallery of Art, get engrossed in the history at Muzeu Historik Kombetar, then brush up on your military savvy at BunkArt 2, and finally don't miss a visit to Skanderbeg Square. 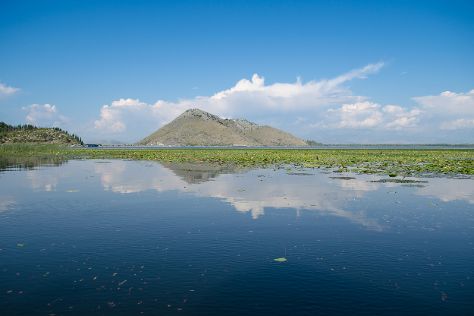 One of Europe's most relaxed and newest capital cities, Podgorica sits on the confluence of two rivers, with two sides of it offering two different options for exploring.

Kick off your visit on the 18th (Sun): explore the activities along Lake Skadar, then pause for some serene contemplation at Cathedral of the Resurrection of Christ, and then contemplate the waterfront views at Morača River.

For more things to do, reviews, photos, and other tourist information, read Podgorica vacation planner.

You can drive from Tirana to Podgorica in 3 hours. Another option is to take a bus. Wrap up your sightseeing on the 18th (Sun) to allow time to travel to Vatican City.
more less

Things to do in Podgorica

Covering 44 hectares (110 acres) in the city center of Rome, the wall-enclosed sovereign state of Vatican City is one of the most famous religious sites worldwide, serving as the papal residence and home of the Roman Catholic church.

On the 19th (Mon), appreciate the history behind La Pieta, then explore the world behind art at Vatican Museums, then take in the spiritual surroundings of Cupola di San Pietro, and finally contemplate the long history of St. Peter's Basilica.

Use the Route module to find suitable travel options from Podgorica to Vatican City. Expect a daytime high around 37°C in July, and nighttime lows around 24°C. Finish your sightseeing early on the 19th (Mon) to allow enough time to drive to Rome.
more less

Things to do in Vatican City

On the 20th (Tue), make a trip to Piazza di Trevi, don't miss a visit to Trevi Fountain, then delve into the distant past at Pantheon, then appreciate the extensive heritage of Piazza Navona, and finally explore the world behind art at Galleria Borghese. Keep things going the next day: don't miss a visit to Spanish Steps, then steep yourself in history at Colosseum, then explore the ancient world of Palatine Hill, and finally contemplate the long history of Roman Forum.

Rome is just a short distance from Vatican City. July in Rome sees daily highs of 37°C and lows of 24°C at night. Finish your sightseeing early on the 21st (Wed) to allow enough time to travel to Serravalle.
more less

©
Serravalle is a castello located in the European republic of San Marino. On the 22nd (Thu), contemplate the long history of Cesta Tower, take in the awesome beauty at Mount Titan, ponder the world of politics at Palazzo Pubblico, step into the grandiose world of Guaita, then take in the architecture and atmosphere at Basilica del Santo Marino, and finally tour the pleasant surroundings at Orti Borghesi San Marino.

For photos, other places to visit, more things to do, and tourist information, use the Serravalle trip itinerary planner.

You can do a combination of train and car from Rome to Serravalle in 4 hours. Alternatively, you can drive; or do a combination of flight, train, and bus. In July, daily temperatures in Serravalle can reach 34°C, while at night they dip to 23°C. Wrap up your sightseeing on the 22nd (Thu) early enough to travel to Valletta.
more less

Things to do in Serravalle

Malta's capital city, Valletta preserves most of its medieval architecture, built in the 16th and 17th centuries by the Knights Hospitaller, once a powerful military order.

Kick off your visit on the 23rd (Fri): explore the fascinating underground world of Blue Grotto (Il-Hnejja), explore the ancient world of Hal Saflieni Hypogeum, witness the site of a historic battle at Saluting Battery, contemplate in the serene atmosphere at St. John's Co-Cathedral, then contemplate the long history of Casa Rocca Piccola, and finally take in nature's colorful creations at Upper Barrakka Gardens.

For maps, reviews, more things to do, and more tourist information, refer to the Valletta trip app.

Things to do in Valletta

Tucked high in the Pyrenees and home to fewer than 65,000 residents, Andorra La Vella seems at first an unlikely tourist hotspot.

To see other places to visit, photos, reviews, and more tourist information, you can read our Andorra la Vella journey maker website.

Traveling by combination of flight and bus from Valletta to Andorra la Vella takes 9.5 hours. Alternatively, you can take a bus; or do a combination of bus and train. You will leave for Madrid on the 24th (Sat).
more less

Things to do in Andorra la Vella

Kick off your visit on the 25th (Sun): stroll around Parque del Retiro, then admire the masterpieces at Prado National Museum, and then don't miss a visit to Puerta del Sol. On the 26th (Mon), you'll have a packed day of sightseeing: steep yourself in history at Plaza Mayor, then examine the collection at Museo Nacional Thyssen-Bornemisza, and then steep yourself in history at Royal Palace of Madrid.

For where to stay, maps, ratings, and tourist information, go to the Madrid holiday planner.

Built on seven hills, Lisbon has experienced a renaissance in recent years, making it the cultural star of Portugal.

Start off your visit on the 27th (Tue): make a trip to Praca do Comercio (Terreiro do Paco), then don't miss a visit to Belém Tower, then take in the spiritual surroundings of Mosteiro dos Jeronimos, and finally visit Alfama. On the 28th (Wed), you'll have a packed day of sightseeing: explore the historical opulence of Castelo de S. Jorge, observe the fascinating underwater world at Lisbon Oceanarium, and then appreciate the history behind Padrao dos Descobrimentos.

You can fly from Madrid to Lisbon in 4.5 hours. Alternatively, you can drive; or take a bus. The time zone changes from Central European Standard Time to Western European Standard Time, which is usually a -1 hour difference. Plan for little chillier temperatures traveling from Madrid in July, with highs in Lisbon at 34°C and lows at 20°C. Cap off your sightseeing on the 28th (Wed) early enough to travel back home.
more less

Things to do in Lisbon