Known as one of the greatest small cities in the world, Amsterdam charms visitors with its cool and cozy atmosphere.

Museum-lovers will get to explore Anne Frank House and Van Gogh Museum. There's much more to do: explore the world behind art at Rijksmuseum, browse the exhibits of Rembrandt House Museum, tour the pleasant surroundings at Vondelpark, and wander the streets of The Jordaan.

To find more things to do, other places to visit, ratings, and more tourist information, use the Amsterdam travel guide.

If you are flying in from Pakistan, the closest major airport is Amsterdam Airport Schiphol. Expect a daytime high around 25°C in August, and nighttime lows around 16°C. Finish up your sightseeing early on the 7th (Sun) so you can catch the train to Rotterdam.
more less

Things to do in Amsterdam

Manhattan on the Maas

Located in the South Holland province, Rotterdam is one of the Netherlands' most lively cities, as well as one of the largest trading ports in the world.

Start off your visit on the 8th (Mon): don't miss a visit to Rotterdam Centraal Station, then take in the architecture and atmosphere at Nieuwe Church, then explore the galleries of Madurodam, and finally admire the masterpieces at Mauritshuis.

Traveling by train from Amsterdam to Rotterdam takes an hour. Alternatively, you can drive. In August, plan for daily highs up to 25°C, and evening lows to 15°C. Wrap up your sightseeing on the 8th (Mon) to allow time to take a train to Brussels.
more less

Things to do in Rotterdam

The allure of the multi-cultural capital, Brussels, stems from its mix of political intrigue, artistic influence, historical significance, and a thriving social scene.

Kick off your visit on the 9th (Tue): stop by Galerie de la Reine, steep yourself in history at Grand-Place, then don't miss a visit to Place St. Gery, and finally get curious at Atomium. Here are some ideas for day two: stop by Elisabeth, examine the collection at Musical Instruments Museum, and then take in the spiritual surroundings of St. Bavo's Cathedral (Sint-Baafskathedraal).

For where to stay, other places to visit, more things to do, and tourist information, use the Brussels travel guide.

Take a train from Rotterdam to Brussels in 1.5 hours. Alternatively, you can drive; or take a bus. August in Brussels sees daily highs of 26°C and lows of 15°C at night. Wrap up your sightseeing on the 10th (Wed) to allow time to take a train to Paris.
more less

Things to do in Brussels

Musée d'Orsay and Louvre Museum will appeal to museum buffs. Get some historical perspective at Palace of Versailles and Arc de Triomphe. It doesn't end there: wander the streets of Le Marais.

To find traveler tips, ratings, more things to do, and tourist information, go to the Paris travel guide.

Getting from Brussels to Paris by train takes about 2 hours. Other options: fly; or drive. In August, daily temperatures in Paris can reach 28°C, while at night they dip to 16°C. Cap off your sightseeing on the 13th (Sat) early enough to catch the train to Frankfurt.
more less

Palace of Versailles
Highlights from your plan 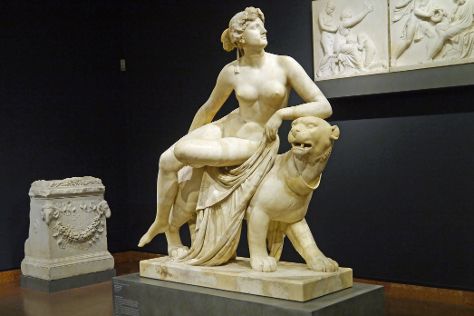 A global center of finance and transportation, Frankfurt is perhaps best known for its futuristic cityscape.

On the 14th (Sun), explore the world behind art at Städel and then admire the masterpieces at Liebieghaus.

For ratings, traveler tips, photos, and other tourist information, use the Frankfurt travel guide.

Traveling by train from Paris to Frankfurt takes 4 hours. Alternatively, you can fly; or drive. In August in Frankfurt, expect temperatures between 30°C during the day and 17°C at night. Wrap up your sightseeing on the 14th (Sun) to allow time to fly to Zurich.
more less

Things to do in Frankfurt

The financial hub of Switzerland, Zurich is most often associated with money and banks.

Start off your visit on the 15th (Mon): stroll through Strandbad Tiefenbrunnen and then appreciate the extensive heritage of Old Town (Altstadt). Get ready for a full day of sightseeing on the next day: browse the collection at Zentralbibliothek Zürich, then stroll the grounds of Friedhof Fluntern (Fluntern Cemetery), and then explore the world behind art at Museum Rietberg.

To find where to stay, maps, other places to visit, and other tourist information, you can read our Zurich travel guide.

You can fly from Frankfurt to Zurich in 4 hours. Other options are to take a train; or drive. In August, daily temperatures in Zurich can reach 27°C, while at night they dip to 16°C. Finish your sightseeing early on the 16th (Tue) to allow enough time to travel to Milan.
more less

Things to do in Zurich

Kick off your visit on the 17th (Wed): don't miss a visit to Galleria Vittorio Emanuele II and then contemplate in the serene atmosphere at Duomo di Milano.

For where to stay, other places to visit, ratings, and tourist information, refer to the Milan travel guide.

You can do a combination of train and flight from Zurich to Milan in 3 hours. Other options are to drive; or take a train. Plan for somewhat warmer temperatures traveling from Zurich in August, with highs in Milan at 34°C and lows at 22°C. Wrap up your sightseeing by early afternoon on the 17th (Wed) to allow time for travel to Barcelona.
more less

Kick off your visit on the 18th (Thu): admire the landmark architecture of La Sagrada Familia, explore the galleries of Casa Batlló, then appreciate the extensive heritage of El Barri Gòtic, and finally take in the architecture and atmosphere at Barcelona Cathedral. Get ready for a full day of sightseeing on the 19th (Fri): see the interesting displays at Casa Milà, then tour the pleasant surroundings at Park Guell, and then have fun at La Casa Vella - Flamenco in Barcelona.

To find maps, other places to visit, reviews, and other tourist information, go to the Barcelona travel guide.

You can do a combination of train, flight, and bus from Milan to Barcelona in 4.5 hours. Alternatively, you can drive; or take a train. In August in Barcelona, expect temperatures between 34°C during the day and 25°C at night. Finish up your sightseeing early on the 19th (Fri) so you can catch the train to Madrid.
more less

Start off your visit on the 20th (Sat): admire the landmark architecture of Royal Palace of Madrid and then see the interesting displays at Thyssen-Bornemisza Museum. Get ready for a full day of sightseeing on the next day: admire the striking features of Plaza Mayor, then admire the natural beauty at Retiro Park (Parque del Retiro), and then examine the collection at Museo Nacional del Prado.

To see maps, ratings, reviews, and other tourist information, you can read our Madrid travel guide.

Take a train from Barcelona to Madrid in 3.5 hours. Alternatively, you can fly; or drive. Traveling from Barcelona in August, expect nights in Madrid to be little chillier, around 21°C, while days are a bit warmer, around 38°C.
more less