Get some historical perspective at Catedral de Sal de Zipaquira and Catedral Diocesana. Get some cultural insight at Gold Museum (Museo del Oro) and Museo Aeroespacial Colombiano. You'll find plenty of places to visit near Bogota: Museo Arqueologico de Zipaquira (in Zipaquira) and Laguna de Guatavita (in Tierra Negra). There's lots more to do: don't miss a visit to Monserrate, browse the eclectic array of goods at Pasaje Rivas, steep yourself in history at Bolivar Square, and admire the masterpieces at Museo Botero del Banco de la Republica.

For maps, traveler tips, other places to visit, and tourist information, go to the Bogota planning app. 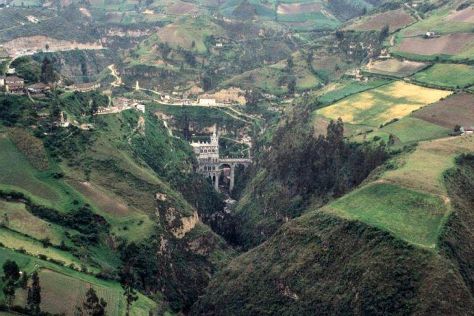 City of the Green Clouds

Situated on a plateau 2,950 m (9,678 ft) above sea level, the city of Ipiales enjoys a subtropical highland climate and the title of highest major city in Colombia.

Start off your visit on the 17th (Fri): admire the landmark architecture of Las Lajas Sanctuary.

Explore your travel options from Bogota to Ipiales with the Route module. Plan for slightly colder temperatures traveling from Bogota in July, with highs in Ipiales at °C and lows at °C. Wrap up your sightseeing by early afternoon on the 17th (Fri) to allow time for travel to San Agustin.
more less

Things to do in Ipiales

Kick off your visit on the 18th (Sat): explore the ancient world of Alto de las Chinas, pause for some photo ops at El Purutal, take in the architecture and atmosphere at Iglesia de San Agustin, thendelve into the distant past at San Agustin Archaeological Park, and finally take an in-depth tour of Museo Precolombino Villa Real. On the 19th (Sun), you'll have a packed day of sightseeing: contemplate the waterfront views at Estrecho Del Magdalena and then pause for some photo ops at La Chaquira.

You can drive from Ipiales to San Agustin in 9.5 hours. While traveling from Ipiales, expect somewhat warmer days and much warmer nights in San Agustin, ranging from highs of °C to lows of °C. Finish your sightseeing early on the 19th (Sun) to allow enough time to travel to Santa Marta.
more less

Things to do in San Agustin

Many visitors begin their Santa Marta holiday, surrounded by urban clutter and heavy traffic, expecting little from the city in terms of historical importance.

You'll discover tucked-away gems like Cristal Beach and Scuba & Snorkeling. Quinta de San Pedro Alejandrino and Alcaldia de Santa Marta are good opportunities to explore the local culture. Step out of Santa Marta with an excursion to Parque Nacional Natural Tayrona in Tayrona National Park--about 1h 10 min away. There's still lots to do: walk around Parque de Los Novios and get up close and personal with brilliant marine life at Marine World Aquarium.

To find reviews, other places to visit, maps, and other tourist information, go to the Santa Marta trip itinerary planning tool.

Fly from San Agustin to Santa Marta in 9.5 hours. Alternatively, you can drive; or take a bus. While traveling from San Agustin, expect much warmer days and a bit warmer nights in Santa Marta, ranging from highs of °C to lows of °C. Wrap up your sightseeing on the 22nd (Wed) to allow time to drive to Cartagena.
more less

Things to do in Santa Marta

The site of the continent's first Spanish colony, Cartagena retains much of its colonial flavor thanks to a World Heritage-listed old town, encircled by old walls and protected by imposing fortresses.

Eschew the tourist crowds and head to Barrio Getsemani and Iglesia de Santo Toribio. Satisfy your inner culture vulture at Centro Historico and Walled City of Cartagena. There's still lots to do: get outside with Bomba Beach Club, make a trip to Plaza de La Trinidad, take in the architecture and atmosphere at Sanctuary of Saint Peter Claver, and contemplate in the serene atmosphere at Templo de Santo Domingo.

For where to stay, maps, ratings, and other tourist information, go to the Cartagena trip planning website.

Traveling by car from Santa Marta to Cartagena takes 3.5 hours. Alternatively, you can take a bus. In July, plan for daily highs up to °C, and evening lows to °C. Finish up your sightseeing early on the 27th (Mon) so you can travel back home.
more less

Things to do in Cartagena