To see more things to do, maps, reviews, and more tourist information, you can read our Venice trip planner.

Green Bay, USA to Venice is an approximately 14.5-hour flight. The time zone difference moving from Central Standard Time (CST) to Central European Standard Time (CET) is 7 hours. Plan for a bit warmer temperatures traveling from Green Bay in April, with highs in Venice at 65°F and lows at 49°F. Finish your sightseeing early on the 5th (Mon) to allow enough time to drive to Florence.
more less

You'll discover tucked-away gems like Pitti Palace and Basilica of Santa Maria Novella. Get some cultural insight at Cathedral of Santa Maria del Fiore and The Baptistery of St. John. There's much more to do: steep yourself in history at Sinagoga di Firenze e Museo ebraico, admire the masterpieces at Florence Academy of Fine Arts, get a sense of history and politics at Museo Nazionale del Bargello, and pause for some photo ops at Loggia dei Lanzi.

To find where to stay, reviews, traveler tips, and other tourist information, read our Florence planner.

Traveling by car from Venice to Florence takes 3 hours. Alternatively, you can take a train; or fly. In April, daytime highs in Florence are 67°F, while nighttime lows are 50°F. Finish up your sightseeing early on the 7th (Wed) so you can catch the train to Rome.
more less 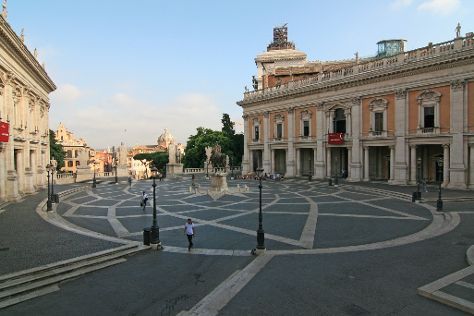 Explore hidden gems such as Basilica di San Pietro in Vincoli and Santa Maria in Trastevere. Get a sense of the local culture at Pantheon and Piazza Navona. There's still lots to do: get engrossed in the history at Mercati di Traiano - Museo dei Fori Imperiali, contemplate the long history of St. Peter's Basilica, contemplate in the serene atmosphere at Cupola di San Pietro, and pause for some serene contemplation at Basilica di Santa Maria degli Angeli e dei Martiri.

For more things to do, where to stay, and tourist information, read our Rome road trip planning tool.

Traveling by train from Florence to Rome takes 2.5 hours. Alternatively, you can drive; or fly. April in Rome sees daily highs of 69°F and lows of 49°F at night. Finish your sightseeing early on the 10th (Sat) so you can take a train to Naples.
more less

©
Naples is the capital of the Italian region Campania and the third-largest municipality in Italy after Rome and Milan. On the 11th (Sun), take in the spiritual surroundings of Pio Monte della Misericordia, don't miss a visit to Decumani di Napoli, contemplate in the serene atmosphere at Chiesa di San Gregorio Armeno, explore the ancient world of The Neapolis Buried, then take in the architecture and atmosphere at Chiesa dei Santi Filippo e Giacomo - Complesso Museale dell'Arte della Seta, and finally take an in-depth tour of Museo delle Torture. Get ready for a full day of sightseeing on the 12th (Mon): admire the masterpieces at Monumental Complex Donnaregina - Diocesan Museum of Naples, explore the ancient world of Teatro Grande, delve into the distant past at Odeon - Teatro Piccolo, then contemplate the long history of Villa dei Misteri, then explore the ancient world of Forum, and finally delve into the distant past at Terme del Foro.

To see other places to visit, traveler tips, more things to do, and more tourist information, read our Naples trip builder.

Traveling by train from Rome to Naples takes 2 hours. Alternatively, you can drive; or fly. April in Naples sees daily highs of 68°F and lows of 52°F at night. Finish your sightseeing early on the 12th (Mon) to allow enough time to drive to Positano.
more less 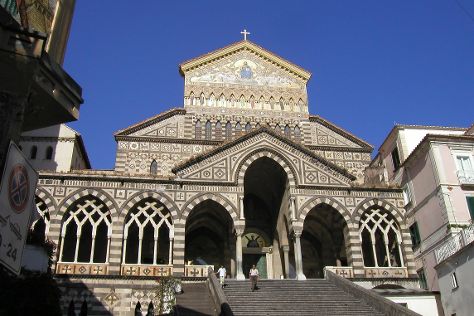 Kick off your visit on the 13th (Tue): get to know the fascinating history of Centro Storico, ponder the design of Fontana sant'Andrea, take in the architecture and atmosphere at Cloister del Paradiso, contemplate in the serene atmosphere at Duomo di Sant'Andrea, then sample the fine beverages at Antichi Sapori d'Amalfi, and finally make a trip to Villa Rufolo. On your second day here, get engrossed in the history at MAR - Museo Archeologico Romano, then get the lay of the land with Walk Positano by Gabriella, then contemplate in the serene atmosphere at Church of Santa Maria Assunta, and finally let your taste buds guide you at a local gastronomic tour.

To find where to stay, reviews, other places to visit, and more tourist information, read our Positano trip builder.

Drive from Naples to Positano in 1.5 hours. Alternatively, you can take a bus. In April, daily temperatures in Positano can reach 67°F, while at night they dip to 55°F. Finish your sightseeing early on the 14th (Wed) so you can travel back home.
more less

Amalfi, Ravello
Highlights from your plan