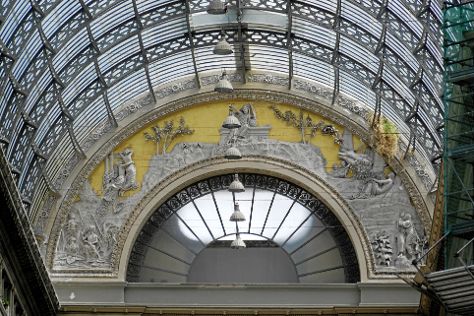 ©
Naples is the capital of the Italian region Campania and the third-largest municipality in Italy after Rome and Milan. Venture out of the city with trips to Villa Imperiale (in Pompeii), Sacello di Santa Matrona (in San Prisco) and Chiesa di San Francesco (in Minturno). There's still lots to do: look for gifts at Louise Moda Positano, pause for some serene contemplation at Chiesa di San Ferdinando, admire the landmark architecture of Palazzo Capuano, and pause for some photo ops at Obelisco di San Gennaro.

To see other places to visit, where to stay, ratings, and other tourist information, use the Naples tour planner.

Dublin, Ireland to Naples is an approximately 6.5-hour flight. You can also do a combination of bus and train; or do a combination of ferry and train. You'll lose 1 hour traveling from Dublin to Naples due to the time zone difference. Traveling from Dublin in August, expect nights in Naples to be a bit warmer, around 25°C, while days are much warmer, around 36°C. Cap off your sightseeing on the 15th (Thu) early enough to catch the train to Rome.
more less

Explore the numerous day-trip ideas around Rome: Piazza del Plebiscito (in Viterbo), Chiostro del Convento di San Francesco (in Tagliacozzo) and Castello Orsini (in Montenero Sabino). The adventure continues: make a trip to Chiesa di Santa Bibiana, take in the pleasant sights at Piazza della Pilotta, pause for some serene contemplation at Chiesa di Sant'Agnese in Agone, and get engrossed in the history at Museo Nazionale Archeologico.

You can take a train from Naples to Rome in 2 hours. Other options are to drive; or take a bus. In August, daily temperatures in Rome can reach 38°C, while at night they dip to 24°C. Finish your sightseeing early on the 18th (Sun) to allow enough time to take a train to Pisa.
more less

Known worldwide for the Leaning Tower of Pisa, the city of Pisa historically served as a maritime power in the heart of Tuscany.

Start off your visit on the 19th (Mon): contemplate in the serene atmosphere at Pieve dei Santi Giovanni ed Ermolao, admire the striking features of Palazzina Marconi, don't miss a visit to Pietra Acheruntica Etrusca, snap pictures at Ponte di Mezzo, thentake in the architecture and atmosphere at Chiesa di S. Paolo all’Orto, and finally take in the pleasant sights at Via Ulisse Dini.

For reviews, other places to visit, more things to do, and other tourist information, read our Pisa online holiday builder.

Take a train from Rome to Pisa in 3 hours. Alternatively, you can fly; or drive. Expect little chillier evenings in Pisa when traveling from Rome in August, with lows around 20°C. Finish your sightseeing early on the 19th (Mon) to allow enough time to take a train to Cinque Terre.
more less

Things to do in Pisa

Made up of five picturesque towns on the Ligurian coast, Cinque Terre is Italy's answer to the French Riviera.

Go for a jaunt from Cinque Terre to Genoa to see Aquarium of Genoa about 1h 45 min away. There's still lots to do: explore the wealth of natural beauty at Parco Nazionale Cinque Terre, don't miss a visit to Borgo Antico, take a leisurely stroll along Passeggiata Lungomare, and get into the urban bustle at Vernazza.

To find photos, more things to do, reviews, and tourist information, use the Cinque Terre tour planner.

Getting from Pisa to Cinque Terre by train takes about 2 hours. Other options: drive; or take a bus. Expect a daytime high around 35°C in August, and nighttime lows around 20°C. Wrap up your sightseeing on the 22nd (Thu) early enough to drive to Malcesine.
more less

Things to do in Cinque Terre

Aquarium of Genoa
Highlights from your plan

©
Malcesine is a comune (municipality) on the eastern shore of Lake Garda in the Province of Verona in the Italian region Veneto, located about 120km northwest of Venice and about 40km northwest of Verona.Geography and divisionsThe comune of Malcesine consists of Navene, Campagnola, Malcesine proper, Val di Sogno and Cassone. Your day-by-day itinerary now includes Parasailing & Paragliding. Explore the numerous day-trip ideas around Malcesine: Ghetto Ebraico (in Riva Del Garda), Tecnocasa di Robert Ferrari (in Pinzolo) and Ferrate Di Casto (in Casto). Next up on the itinerary: get outside with Sentiero "Dalle storie alla Storia", make a trip to Chiesa di San Defendente, learn about winemaking at Brunelli Winery, and take a peaceful walk through Riserva Naturale Integrale Gardesana Orientale.

You can drive from Cinque Terre to Malcesine in 4.5 hours. Alternatively, you can do a combination of train and bus; or take a train. August in Malcesine sees daily highs of 35°C and lows of 21°C at night. Wrap up your sightseeing on the 26th (Mon) to allow time to travel back home.
more less

Things to do in Malcesine