Gold Museum (Museo del Oro) and Salt Cathedral are good opportunities to explore the local culture. Museo Botero del Banco de la Republica and La Candelaria will appeal to museum buffs. There's much more to do: explore the activities along Laguna de Guatavita, examine the collection at Museo de Trajes Regionales, steep yourself in history at Plaza de Bolivar, and take your sightseeing to a higher altitude at Mount Monserrate.

For maps, more things to do, other places to visit, and tourist information, read Bogota trip builder.

Use the Route module to find suitable travel options from Santo Domingo, Dominican Republic to Bogota. The time zone difference moving from Atlantic Standard Time (AST) to Colombia Time (COT) is minus 1 hour. Plan for colder temperatures traveling from Santo Domingo in November, with highs in Bogota at 22°C and lows at 10°C. Wrap up your sightseeing on the 5th (Sat) early enough to fly to Cartagena.
more less

The site of the continent's first Spanish colony, Cartagena retains much of its colonial flavor thanks to a World Heritage-listed old town, encircled by old walls and protected by imposing fortresses.

Popular historic sites such as Walled City of Cartagena and Torre del Reloj are in your itinerary. Do some cultural sightseeing at San Felipe de Barajas Castle and Playa De Punta Arena. Change things up with a short trip to Playa Blanca in Isla Baru (about 52 minutes away). There's still lots to do: head off the coast to Islas del Rosario, don't miss a visit to La Popa Monastery, admire the striking features of Las Bovedas, and pause for some serene contemplation at Sanctuary of Saint Peter Claver.

To see where to stay, maps, photos, and other tourist information, go to the Cartagena vacation planner.

Traveling by flight from Bogota to Cartagena takes 2 hours. Alternatively, you can take a bus; or drive. In November, Cartagena is much warmer than Bogota - with highs of 37°C and lows of 30°C. Cap off your sightseeing on the 10th (Thu) early enough to catch the flight to San Andres Island.
more less

Things to do in Cartagena

Playa Blanca
Highlights from your plan

Start off your visit on the 11th (Fri): pause for some serene contemplation at Primera Iglesia Bautista, then step off the mainland to explore Johnny Cay, and then stroll through Playa de Spratt Bight. On your second day here, kick back and relax at Playa de San Luis and then look for all kinds of wild species at La Piscinita.

You can fly from Cartagena to San Andres Island in 2 hours. In November, daily temperatures in San Andres Island can reach 34°C, while at night they dip to 28°C. Finish your sightseeing early on the 12th (Sat) to allow enough time to fly to Medellin.
more less

Things to do in San Andres Island 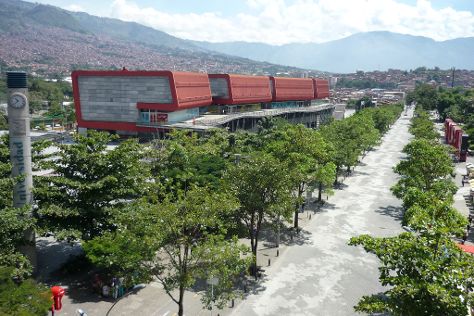 City of the Eternal Spring

Nestled between rising hills in a narrow valley, Medellin serves as an energetic melting pot of people from all socio-economic classes.

Start off your visit on the 13th (Sun): contemplate the long history of Pueblito Paisa, then don't miss a visit to Plaza Botero, and then admire nature's wide array of creatures at Parque Explora.

Things to do in Medellin

Many visitors begin their Santa Marta holiday, surrounded by urban clutter and heavy traffic, expecting little from the city in terms of historical importance.

Santa Marta is known for nature, beaches, adventure, sightseeing, and museums. Your plan includes some of its best attractions: stroll through Cristal Beach, pause for some serene contemplation at Catedral de Santa Marta, admire nature's wide array of creatures at Acuario Mundo Marino, and enjoy the sand and surf at Playa Blanca.

To find traveler tips, more things to do, other places to visit, and other tourist information, read Santa Marta trip itinerery planner.

You can fly from Medellin to Santa Marta in 2 hours. Alternatively, you can do a combination of flight and bus; or drive. Prepare for somewhat warmer weather when traveling from Medellin in November: high temperatures in Santa Marta hover around 38°C and lows are around 28°C. Finish up your sightseeing early on the 16th (Wed) so you can travel back home.
more less

Things to do in Santa Marta