As the capital and largest city of Belarus, Minsk represents a cultural center full of churches, libraries, museums, and theatres.

Museum-lovers will appreciate Museum Strana Mini and Sula History Park-Museum. Eschew the tourist crowds and head to Belarusian Folk Museum of Architecture and Rural Life and Zamok Mall. The adventure continues: savor the flavors at Minskiy Komarovskiy Market, learn about all things military at Belarusian State Museum of the History of the Great Patriotic War, pause for some serene contemplation at Archcathedral Holy Name of the Blessed Virgin Mary, and get engrossed in the history at Money Museum Groshi.

For more things to do, ratings, maps, and tourist information, you can read our Minsk journey planner.

Paris, France to Minsk is an approximately 7-hour flight. You can also drive; or take a train. The time zone difference when traveling from Paris to Minsk is 2 hours. In June, plan for daily highs up to 73°F, and evening lows to 53°F. Finish your sightseeing early on the 5th (Fri) to allow enough time to travel to Kyiv (Kiev).
more less

Things to do in Minsk

Kick off your visit on the 6th (Sat): kick back and relax at Olmeca Beach, then get engrossed in the history at Victoria Museum, then examine the collection at Mikhail Bulgakov Museum, and finally see the interesting displays at One Street Museum. Get ready for a full day of sightseeing on the next day: look for gifts at Roshen, then explore the world behind art at Bohdan and Varvara Khanenko National Museum of Arts, then learn more about the world around you at National Museum of Natural History, and finally see the interesting displays at State Aviation Museum.

To see other places to visit, ratings, traveler tips, and other tourist information, use the Kyiv (Kiev) travel planner.

Things to do in Kyiv (Kiev)

©
Chișinău Etymology and namesThe origin of the city's name is unclear, but in one version, the name comes from the archaic Romanian word chișla (meaning "spring", "source of water") and nouă ("new"), because it was built around a small spring, at the corner of Pușkin and Albișoara streets.The other version, formulated by Ștefan Ciobanu, Romanian historian and academician, holds that the name was formed the same way as the name of Chișineu (alternative spelling: Chișinău) in Western Romania, near the border with Hungary. Start off your visit on the 8th (Mon): contemplate in the serene atmosphere at Dormition of the Theotokos, learn about winemaking at Asconi Winery, then take in the architecture and atmosphere at Cathedral of Divine Providence, then look for gifts at Bucuria, and finally pause for some serene contemplation at Church of St. Nicholas. Keep things going the next day: do a tasting at Cricova Winery and then admire the masterpieces at National Museum of Moldovan Art.

To see maps, where to stay, and other tourist information, refer to the Chisinau trip planner.

Traveling by flight from Kyiv (Kiev) to Chisinau takes 5 hours. Alternatively, you can drive; or take a bus. Finish up your sightseeing early on the 9th (Tue) so you can travel to Bucharest.
more less 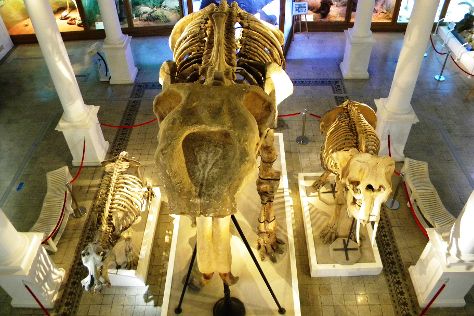 Satisfy your inner culture vulture at Grigore Antipa National Museum of Natural History and The Art Collections Museum. For shopping fun, head to Carturesti Carusel or AFI Cotroceni. There's much more to do: explore the world behind art at The National Museum of Art of Romania, browse the different shops at Promenada Mall, see the interesting displays at Ceausescu Mansion, and admire the striking features of Coral Temple.

For ratings, reviews, and other tourist information, read our Bucharest trip planner.

You can fly from Chisinau to Bucharest in 4.5 hours. Other options are to drive; or take a bus. In June in Bucharest, expect temperatures between 82°F during the day and 58°F at night. Finish up your sightseeing early on the 12th (Fri) so you can travel back home.
more less

©
The National Museum of Art of Romania